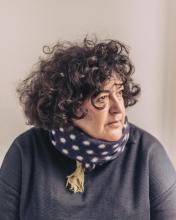 The work is an intimate autobiographical novel of an Algerian Muslim family’s exile from home and unwelcoming reception in France.  The tale of imprisonment and escape, persecution and loss, is narrated by the daughter of an alleged Harki, an Algerian soldier who fought for the French during the Algerian War for Independence. It was the fate of such men to be twice exiled, first in their homeland after the war, and later in France, where fleeing Harki families sought refuge but instead faced contempt, discrimination, and exclusion.

Zahia Rahmani blends reality and imagination in her writing, offering a fictionalized version of her own family’s struggle. Lara Vergnaud’s beautiful translation from the French perfectly captures the voices and emotions of Rahmani’s childhood in a foreign land. While the author delves deeply into the past, she also indicts present-day France and Algeria. From the unique perspective of the daughter of an accused Harki, she examines France’s complex and controversial history with its former colony and offers new insight into the French civil riots of 2005. She makes a stirring plea for understanding between generations and cultures, and especially for an end to the destructive practice of condemning children for their fathers’ actions and beliefs.

The Algerian-born academic and author Zahia Rahmani is one of France’s leading art historians and writers of fiction, memoirs, and cultural criticism. She is the author of Moze, “Musulman” and France, Récit d’une enfance. The French Ministry of Culture named her Chevalier of Arts and Letters and as a member of the College of the Diversity. As an art historian, Rahmani is Director of the Research Program on Art and Globalization at the French National Institute of the History of Art (INHA). Her research project at the INHA culminated in Made in Algeria: Genealogy of a Territory, a book and current exhibition of colonial cartography, high and popular visual culture, and contemporary art at the Museum of European and Mediterranean Civilisations (MuCEM), located in Marseille. Zahia Rahmani is currently a visiting professor at NYU Gallatin Faculty.