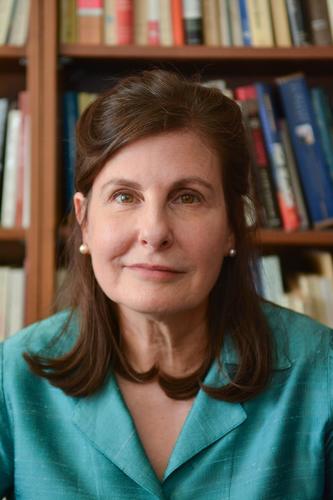 A full announcement is below. Please join me in congratulating Alice!

We are delighted to announce that Alice Kaplan, the John M. Musser Professor of French, will take on the role of Director of the Whitney Humanities Center for three years, beginning July 1, 2020.

A leading scholar of 20th and 21st Century French and Francophone literature and history, Kaplan will bring a capacious intellectual vision to the directorship of the Whitney Humanities Center. The author of seven books on topics including WWII-era France, post-war culture, and French-American cultural exchange, her writings have shaped the study of French intellectual life, earning broad readership and acclaim both within and beyond the academy. Her 1993 work French Lessons was a finalist for the National Book Critic’s Circle Award. Her 2000 work The Collaborator: The Trial and Execution of Robert Brasillach was a finalist for the National Book Award and the National Book Critic Circle’s Award and won the LA Times Book Prize for History. In 2005, her book The Interpreter won the Henry Adams Prize from the Society for History in the Federal Government. And her most recent work, Looking for the Stranger: Albert Camus and the Life of a Literary Classic, was a New York Times notable book of 2016 and a finalist for the National Book Critics Circle Award. Kaplan is a Guggenheim Fellow, a member of the American Academy of Arts and Sciences, and recipient of the French Légion d’Honneur.  She is also a trustee of the Camargo Foundation in Cassis, France, and a founding member of the MaisonDAR collective in Algiers.

Kaplan has twice chaired Yale’s Department of French and is the co-founder and Director of the Yale Translation Initiative at the MacMillan Center. Under her leadership, the Initiative has emerged as a key intellectual hub for the hundreds of members of the Yale community whose work touches on translation, from fields as diverse as the national literatures and comparative literature, political science, and computer science. We are thrilled for Kaplan to draw on this capacity to build cross-disciplinary community in her new role at the Whitney Humanities Center. “Whenever Alice Kaplan is in the room, the conversation becomes simultaneously more sophisticated and more vibrant” says Kathryn Lofton, FAS Acting Dean of the Humanities, adding, “she is ingenious, humane, and inspiringly collaborative. We are thrilled that she has agreed to lead the Center as it enters its new physical home and launches an expanded role in the humanities at Yale.”  Kaplan will begin her leadership at the same moment that the Whitney Humanities Center moves from 53 Wall St. to 320 York, the renovated building formerly known as the Hall of Graduate Studies which will serve as Yale’s new hub for the Humanities.

We thank and congratulate Gary Tomlinson, outgoing Director of the Whitney Humanities Center, for his eight years of visionary leadership. Tomlinson “set a consistent focus on research, creating opportunities for adventurous, cross-disciplinary, and curiosity-driven initiatives arising directly from the faculty’s cutting-edge projects,” according to Amy Hungerford, former FAS Dean of the Humanities. During his tenure as director, Tomlinson made the Whitney Humanities Center a place where faculty of all ranks could find an intellectual home, and he led the Center to increased visibility on a national and international stage as a centerpiece for Yale’s excellence in the humanities.  “It’s a great honor to follow on Gary Tomlinson’s brilliant work at the Whitney,” Kaplan said.

We are also grateful that Paul North, Professor of Germanic Languages & Literatures, has agreed to serve as Interim Director when Kaplan is on leave in Spring 2021.

Kaplan will continue the Whitney Humanities Center’s work advancing scholarly exchange across the humanities at Yale, guiding the intellectual agendas of programs such as the Franke Visiting Fellows, Franke Lectures, Finzi-Contini Lectures, Tanner Lectures on Human Values, Humanities/Humanity, and others. She will also lead Yale’s Whitney Fellows in fostering collaboration and dialogue that crosses disciplinary boundaries.

Kaplan earned a B.A. in French from the University of California, Berkeley in 1975, after spending a year at the Université de Bordeaux III. She completed her Ph.D. in French and Philosophy at Yale in 1981 and joined the Yale Faculty in 2008.