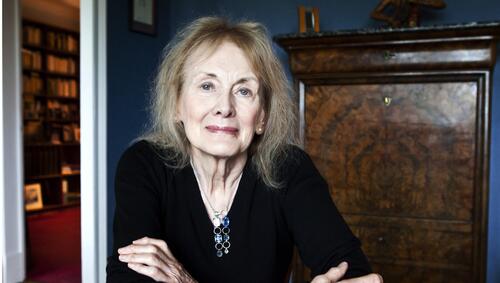 On October 2, 2014, French writer Éric Chevillard published a sarcastic review of Patrick Modiano’s latest novel, Pour que tu ne te perdes pas dans le quartier (So That You Don’t Get Lost in the Neighborhood). The (gently) mocking article called Modiano a “creator of atmosphere” and compared the novel to an “aerosol” that quickly evaporates. Four days later, Modiano won the Nobel Prize. This year, such bad timing took on a more personal note for me. I’m teaching an undergraduate seminar at Yale entitled “Fictions of Consumer Society.” After Émile Zola’s landmark novel on department stores, Au Bonheur des dames (The Ladies’ Delight, 1883), we were preparing to study Annie Ernaux’s stunning first novel, Les Armoires vides—literally, The Empty Wardrobes. Unfortunately, the bookstore’s shelves were empty, too: Barnes & Noble informed me, on October 5th, that Dalkey Archives had decided not to republish the book. On October 6th, Annie Ernaux was awarded the Nobel Prize. My joy about the Nobel is enhanced by the certainty that all her books will be accessible from now on.

Annie Ernaux was born Annie Duchesne in 1940 to a family of peasants, workers, and shopkeepers. Her parents—who left school at the age of 12—owned a grocery store-café on the outskirts of a small town in Normandy. Besides writing, Ernaux taught in high schools at the beginning of her career and quickly joined the National Center for Distance Education (CNED), where she worked until her retirement. She has been living for years in the suburbs of Paris, in a “new town” built in the 1970s, Cergy-Pontoise. Her attention to the details of ordinary life and the importance of trains and supermarkets as memory spaces are particularly potent in her “extimate diaries” of this city, Journal du dehors (Exteriors, 1993) and La Vie extérieure (Things Seen, 2000). In 2023, Yale University Press will publish the translation of her “diaristic meditation on the uniquely modern phenomenon of the big-box superstore,” Regarde les lumières, mon amour (Look at the Lights, My Love, 2014). Ernaux’s social and geographical trajectory, from Normandy to Cergy and from her parents’ corner store to suburban malls, constitutes an important strand of her oeuvre.

Influenced by the work of Pierre Bourdieu and Simone de Beauvoir, Annie Ernaux constantly weaves social and feminist considerations, as in her first novel Les Armoires vides (Cleaned Out, 1974), in which she puts side by side the narrator’s back-street abortion and upward mobility. She will later abandon the novel form (and the tense, revengeful tone of her first texts), notably in La Place (A Man’s Place, 1983), a brief and powerful narrative on social emancipation in light of her father’s death. As an “ethnologist of herself,” Ernaux publishes “auto-socio-biographies” on her family and social trajectory: Ce qu’ils disent ou rien (Do What They Say or Else, 1977) on adolescence; Une Femme (A Woman’s Story, 1987) and “Je ne suis pas sortie de ma nuit” (I Remain in Darkness, 1997) on her mother; La Honte (Shame, 1997) on social violence and affects; and L’Autre fille (2011) on the author’s sister who died before Ernaux was born. Her works have greatly influenced generations of upwardly mobile writers, including Didier Éribon, Virginie Despentes, Kaoutar Harchi, Édouard Louis, Nicolas Mathieu, and Emmanuelle Richard. Ernaux invented a specific language at the crossroads of literature, history, and sociology. Her “flat writing,” later called a “detached” or “factual” writing, is an egalitarian style, a potential vector of class mobility that makes it possible to address the greatest number of readers by fusing the language registers of her original social class and of her class of arrival. Her accessible yet highly crafted prose has the power to overcome social estrangement and generate a stylistical leveling that aims to do away with hierarchies. For many readers and critics, the navel-gazing of autobiographies is accountable for the decline of contemporary French literature. In the case of Ernaux, it morphs into a formidable eye-opening tool for inquiry. Whether she uses the “I” or alternates between various personal pronouns, she aims to decenter herself, to find history and community within the singular details of her biography; the more personal, the more socially relevant. Indeed, the anthology of her oeuvre is entitled Écrire la vie (writing life), not “my” life.

The Nobel Prize also foregrounds Ernaux’s unswerving fight against inequality and for the rights of those she calls “the dominated,” most recently Yellow Vests protesters and undocumented migrants. In the book-long interview Le Vrai lieu, she defines herself not as “a woman who writes,” but as “someone with a woman’s history who writes” and demonstrates an unflinching feminism in book after book: La Femme gelée (A Frozen Woman, 1981), a scathing narrative on how a girl raised to be independent ended up in a normative relationship; a precise account of her abortion in L’Événement (Happening, 2000) at a time when abortion and contraception were both illegal in France, and particularly hard to access for working-class women; and a narrative and reflection on rape and consent in Mémoire de fille (A Girl’s Story, 2016). Another aspect of her feminist prose has to do with her explicit explorations of sex and desire: her affair with a Russian diplomat in Passion Simple (Simple Passion, 1991) and Se Perdre (Getting Lost, 2001); jealousy in L’Occupation (The Possession, 2002); the sexual body undergoing chemotherapy in L’Usage de la photo (2005); and her relationship with a man thirty years her junior in Le Jeune Homme (2022). Three of these feminist texts have been adapted for the screen: L’Autre (2008), Passion simple (2020), and L’Événement (2021).

France is the country that has received the most Nobel Prizes in literature. Patrick Modiano won it in 2014 and subsequently delivered a remarkable Nobel Lecture. Maryse Condé was awarded the Alternative Nobel in 2018 (see the volume “A Writer of Our Times,” published this year by Yale French Studies). What the Nobel Prize seems to reward is the attention of French writers to memory. In 2014, the Academy praised Modiano’s “art of memory with which he has evoked the most ungraspable human destinies and uncovered the life-world of the occupation.” This year, the Academy chose the same keyword but with a different emphasis. Ernaux was acclaimed “for the courage and clinical acuity with which she uncovers the roots, estrangements and collective restraints of personal memory.” From Modiano to Ernaux, the “art of memory” becomes “personal.” Assuredly, she could be read as a memoirist, an archivist, a witness even. But she is an artist, too, who looks at the world through literary glasses. Life for her is a matter of forms. Textuality guarantees the authenticity of her social and autobiographical narratives. With its statement, the Nobel Academy must have in mind Annie Ernaux’s most acclaimed (and longest) book, Les Années (The Years, 2008), a Proustian memoir retracing the life of a woman and of an entire generation from the 1940s to today. We can read the title of this literary summa, Les Années with a capital A, as the plural and impersonal form of Ernaux’s first name, Annie, or even as any in English. With one of the two sons she had with the man to whom she owes her writer’s name, Ernaux is releasing the movie The Super 8 Years this fall, thereby continuing to show how private stories, documents, and reels can reflect the life of an entire population. We are at a crossroads in Ernaux studies: while the Academy emphasizes memory, the Prize will crystallize how Ernaux will be read and remembered. The reception of Ernaux’s works has often been split. She was praised for her social texts, but violently attacked for her sexual ones, alternatively called a “skivvy,” a “starry-eyed girl,” and even “Madame Ovary.” Ernaux spent her life upending classifications; her writings have enlarged and tilted the stakes of literature. She greatly admires Proust’s quest, the monumental architecture of his project, but she also sides with Françoise, whom she does not perceive as a servant but as her mother, as herself. Memory is crucial for Proust as for Ernaux, but memory is not more literary than abortion, social class, or supermarkets. Ernaux should not necessarily be “a kind of French working-class Marcel Proust” to be memorable.

Most of Ernaux’s books are published by Seven Stories Press, which issued a statement this week to congratulate the author. For more on Ernaux and the Nobel, see the following articles in Le Monde, En attendant Nadeau, and France Culture, as well as interviews on France Inter and in En attendant Nadeau. To explore her work more critically, I also recommend her published working diary L’Atelier noir (recently augmented) and the Cahier de l’Herne.

Morgane Cadieu is Associate Professor of French at Yale. Her next book On Both Sides of the Tracks: Social Mobility in Contemporary French Literature, centered on the works of Annie Ernaux, is forthcoming with The University of Chicago Press.