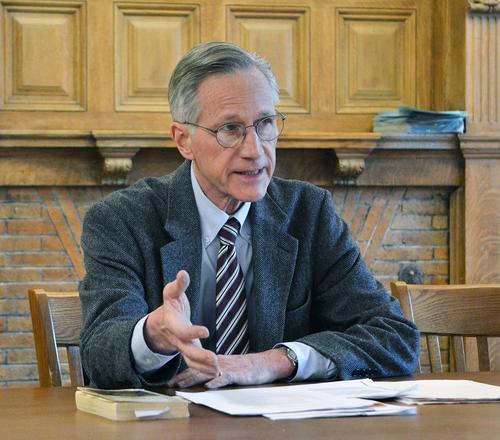 Edwin Duval, B.A. Stanford University, Ph.D. Yale University, faculty member since 1987: You are a distinguished scholar of the long French Renaissance, an expert on the way Renaissance poetry and prose generate meaning. In addition to your other critical contributions, the advances you have brought to the studies of the towering sixteenth-century French writer and humanist François Rabelais places you among the pathbreaking critics of this period. In three successive books you have illuminated the meaning of Rabelais’ Gargantua and Pantagruel, inviting close looks at the beginning and end of texts, clearing up long-held critical logjams in the prologue to Gargantua, illuminating the concentric circles of the third and fourth Rabelaisian books, demonstrating Rabelais’s deep affinity with Montaigne, and, with customary philological precision, focusing on the contradictions inherent in interpreting and explicating so much challenging and difficult material.

As scholars, our job is to want the truth, to demand logic, and to get it right, even though the literature that we unpack may contain an antithetical wisdom. Your literary criticism is probity itself. As much as any other scholar we have known or have been privileged to have as a colleague, your work has embodied precision of thought and erudition. It is a model to remember whenever we are tempted to cut a scholarly corner or make a sloppy argument. You will continue to set a gold standard for your fellow humanists in the way they approach their own work.

Your devotion to research has not meant that you have neglected anything else. In your department you have done the trifecta: you were DUS, DGS, and Chair. Your gifts as a teacher were recognized when in 2015 you were awarded the Harwood F. Byrnes/Richard B. Sewall Prize for Undergraduate Teaching. Among your most important contributions to Yale College is your introduction to close reading and analysis of literary texts written in French, from DuBellay to Sartre, for current and former students of Directed Studies.

Academics share opinions more than most people, and more than most we ask rhetorical questions, secretly wanting rhetorical confirmation. Your integrity in such exchanges is rare and rock-solid. There’s a particular kind of laugh when you agree with your colleague; followed by a recollected detail as proof. A sharp laugh (with a wrinkle) in cases of polite agreement; with a criticism the colleague will only discover if he or she asks. But then—and your students must have cherished this most—there’s the I-don’t-know: a moment that belongs to a whole mood of honest interrogation. The Socratic method is a game only one can play, but, with you, it’s as if there are two questioners somewhere in the same person. This sense is familiar to anyone who has known and learned from you, a touchstone of your character, but also a definition of intelligence.

Besides literature, your other first love is music; you combine, in the highest possible degree, the traits of sensibility and discipline that characterize a gifted musician. In music, as in literature, your students at all levels have come to regard you with the mingled fear and devotion that properly belong to the maestro. As you retire, your admiring colleagues pay homage with a resounding merci de tout coeur.