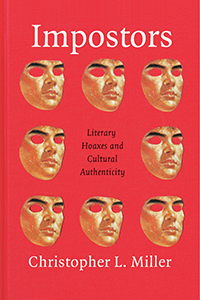 Writing a new page in the surprisingly long history of literary deceit, Impostors examines a series of literary hoaxes, deceptions that involved flagrant acts of cultural appropriation. This book looks at authors who posed as people they were not, in order to claim a different ethnic, class, or other identity. These writers were, in other words, literary usurpers and appropriators who trafficked in what Christopher L. Miller terms the “intercultural hoax.”

In the United States, such hoaxes are familiar. Forrest Carter’s The Education of Little Tree and JT LeRoy’s Sarah are two infamous examples. Miller’s contribution is to study hoaxes beyond our borders, employing a comparative framework and bringing French and African identity hoaxes into dialogue with some of their better-known American counterparts. In France, multiculturalism is generally eschewed in favor of universalism, and there should thus be no identities (in the American sense) to steal. However, as Miller demonstrates, this too is a ruse: French universalism can only go so far and do so much. There is plenty of otherness to appropriate. This French and Francophone tradition of imposture has never received the study it deserves. Taking a novel approach to this understudied tradition, Impostors examines hoaxes in both countries, finding similar practices of deception and questions of harm.