An introduction to the Old French language, medieval book culture, and the prose romance via study of manuscript Yale Beinecke 229, The Death of King Arthur, along with a book of grammar and an Old French dictionary. Primary and secondary materials are available on DVD. Work consists of a weekly in-class translation and a final exam comprised of a sight translation passage, a familiar passage from Yale 229, and a take-home essay.

No previous study of Old French necessary, although a knowledge of French is essential. Conducted in English.

An exploration of the works of Geoffrey Chaucer (ca. 1340–1400), brilliant writer and translator. Using modern postcolonial as well as medieval theories of translation, memory, and bilingualism, we investigate how texts in French, Latin, and Italian are transformed, cited, and reinvented in his writings. Some key questions include: What happens to language under the pressure of crosslingual reading practices? What happens to the notion of translation in a multilingual culture? How are ideas of literary history affected by understanding Chaucer’s English in relation to the other more prestigious language worlds in which his poetry was enmeshed? Texts include material in French, Middle English, Latin, and Italian. Proficiency in any one or more of these languages is welcome, but every effort is made to use texts available in modern English translation, so as to include as wide a participation as possible in the course.

Books are not only the medium of great literary works. They are also competing commercial products that, in order to be bought and/or read, must attract and retain attention, spark interest, and excite or meet a specific need. This course examines how markets, production techniques, habits, fashions, or advertising practices shape literary production. Drawing from the Beinecke collections, we study a wide range of diverse early modern French books to rethink the way we approach literature in general, from titles to typography, from structure to the very content of a work.

This seminar looks at the development of the poème en prose, from its beginnings as a response to the inadequacy of French verse forms, which were said to lend themselves poorly to the translation of ancient epic, to its emergence as an independent genre. What constitutes a prose poem, and why do we need to distinguish it from prose, poetry, and even poetic prose? Readings include work by Fénelon, Parny, Baudelaire, Bertrand, Rimbaud, Laforgue, Nerval, Mallarmé, Jacob, Michaux, Ponge, and Char, as well as Hölderlin, Poe, and Rilke.

This course covers readings in European cultural history from 1789 to the present, with a focus on Western Europe.

In the words of the anthropologist Maurice Godelier, “sexuality is always something other than itself” (a biological phenomenon), and it is sexuality’s social and discursive constructions that we study in this seminar, through a large sample of texts from different genres. By crossing the approaches of gender studies, the history of emotions, and historical anthropology and literary analysis, we look at the abundant speech of sex that characterizes the Renaissance, where prohibition has had the value of incentive, as Michel Foucault has so clearly shown. Readings in erotic/pornographic poetry (Ronsard, Jodelle, Théophile de Viau), travel literature (Cholières), self-portraiture (Montaigne), chronicles and anecdotes (Brantôme, Pierre de l’Estoile), medical literature (Joubert, Paré, Duval), and short stories (Cent nouvelles nouvelles). Conducted in French.

This course studies the encounter between eighteenth-century philosophers and the question of slavery. It examines the clash between the Enlightenment claim to universalism and the historical slave trade. Readings include the writings of the philosophes (Montesquieu, Voltaire, Rousseau, the Encyclopédie), testimonies of the victims of the trade (Equiano, Cugoano), the discourse of abolitionists (Condorcet, Grégoire), and plays devoted to the discussion of slavery (Gouges, Pigault-Lebrun). Our approach to those texts expands into a variety of critical and theoretical arguments spanning a number of disciplines (history, anthropology, economics, and ecology). Conducted in French.

This seminar explores the literature(s) of Canada in its long history, its considerable linguistic and cultural range, and its complex relationship to political history. Like Canada itself, Canadian literature represents a “contact zone” between First Nations peoples, French and British settlers, and immigrants from Eastern Europe, East and South Asia, and the Caribbean. Particular focus on Canada’s diverse early literatures (from Jesuit hymn to epistolary novel); on the prominent role of women writers across Canadian literature history; on the emergence of an experimental Québécois literature (utilizing Montreal patois as a new literary language) in an era also marked by secularization, modernization, and political separatism; on English Canadian attempts to rethink colonial history; and on the critiques of Canada’s ongoing decolonization process by new generations of indigenous, immigrant, and ethnic writers. This course explores both literary history and literary form; and the work of internationally famous novelists and poets (Leonard Cohen, Marie-Claire Blais, Margaret Atwood, Alice Munro, Michael Ondaatje) and their innovative local counterparts. Throughout the term, moreover, our discussion of written literary texts (poems, novels, plays) is supplemented by primarily oral texts (Canadian anthems, ballads, folk, rock, and punk songs in a range of Canadian languages). We are thus listening to even as we are reading Canada.

The seminar studies literature and art from nineteenth-century France alongside theoretical and historical reflections to explore the significance of modernity. How did historical forces shape cultural trends? How did literature and art define what it means to be modern? Writers to be studied include Balzac, Baudelaire, Flaubert, Maupassant, and Zola. Theorists include Benjamin, Durkheim, Foucault, Marx, Simmel, and Weber. We also examine the painting of Manet and his followers.

For information about courses please refer to: 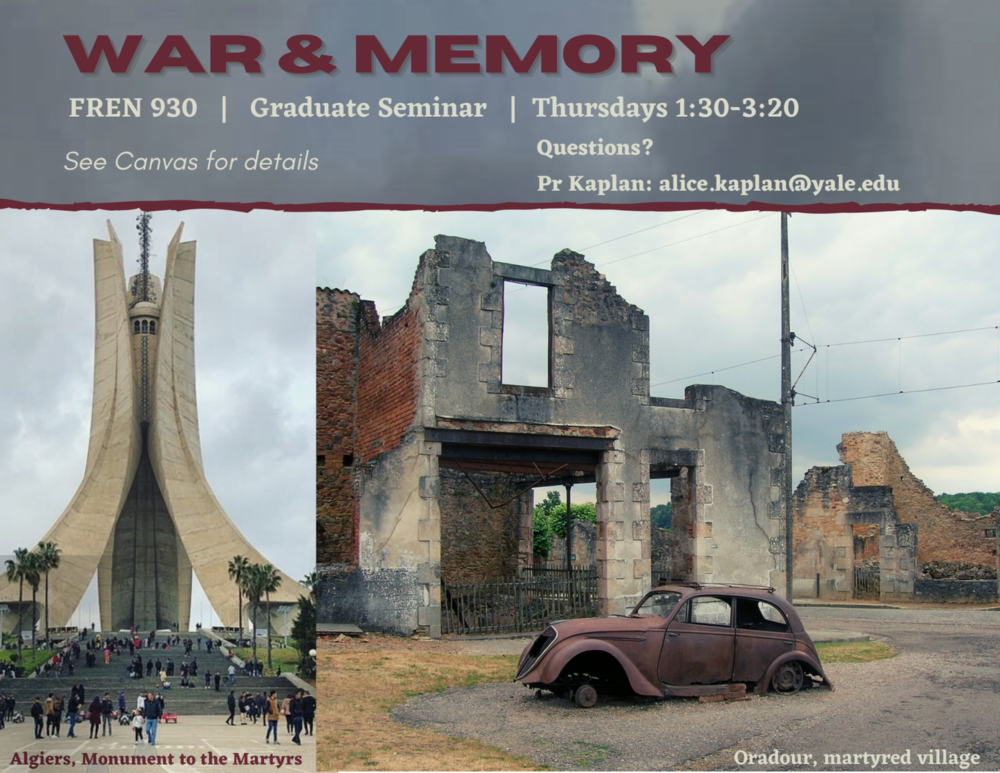